Skip to main content
« Back to the lexicon overview

Equine myopathy (PSSM2) is a collective term for a number of related muscle disorders with similar clinical symptoms. Typical symptoms include reluctance to move, intermittent lameness, stiffness, and in daily practice it can manifest as exercise intolerance. Symptoms are generally adult-onset, usually after 7-10 years of age (depending on breed and environment); mild symptoms may be obvious at a younger age or after a stressful event (injury, operation, infection, move) leading to negative nitrogen balance.

Two subtypes of PSSM2 can be described:

Several variants (P2, P3, P4, Px, P8, K1) in the genes MYOT, FLNC, MYOZ3, CACNA2D3, PYROXD1 and COL6A3 have been shown to be associated with horses developing symptoms of PSSM2. The proteins coded by the genes are involved in the structure (myofibrils) and function of the muscles.

Research is on-going to identify more genetic variants that may be responsible for subtypes of PSSM2. 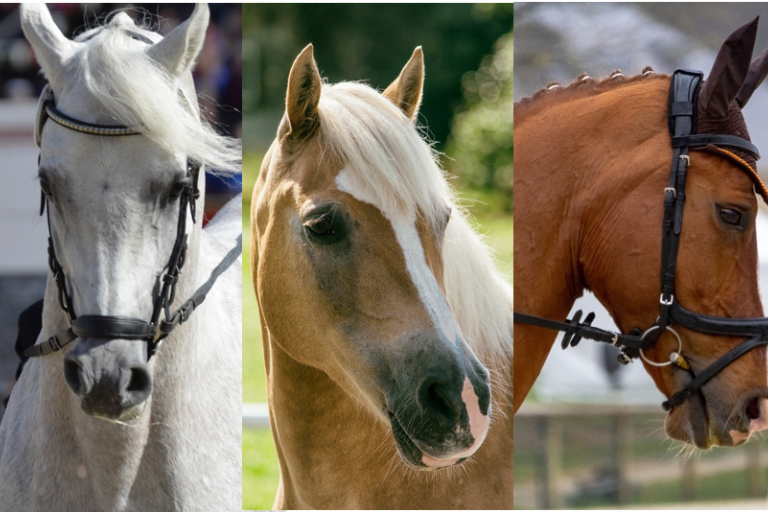 Most breeds can be affected with the symptoms of PSSM2.

The Equine Myopathy/PSSM2 panel is offered under license from EquiSeq Inc. and is based upon their research. 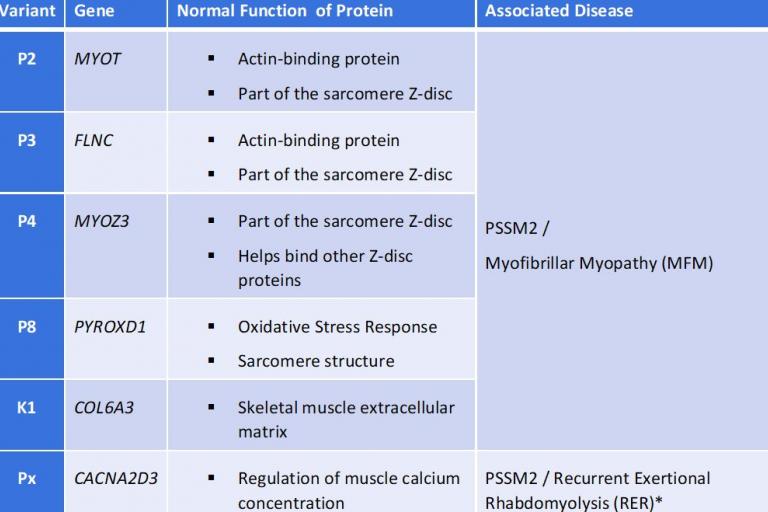 Muscle disorders in humans and horses have an number of overlapping descriptions and names, depending upon the primary finding (for example, based on evaluation of clinical signs, biopsy findings).  Some subtypes include:

MFM is a subtype of PSSM2. MFM can cause a specific type of damage in the muscles, however, this is not apparent in a normal muscle biopsies and was only revealed by a recently developed staining methods. However, many horses with physical symptoms similar to what we classify as MFM still do not show changes on biopsy outside of an acute episode.

Research by EquiSeq has identified semi-dominant alleles in five genes that are associated with MFM (P2, P3, P4, P8 and K1). Horses carrying one copy of one of the variants (n/P2, n/P3 or n/P4) have a predisposition to develop MFM (diagnosed as PSSM2).

Horses with two copies of the variant (P2/P2, P3/P3, P4/P4, P8/P8 or K1/K1) are often more severely affected, with more severe symptoms and an earlier age of onset.

In humans, mutations in:

RER is also considered a subtype of PSSM2, with some of the above symptoms. In addition, in symptomatic horses blood levels of creatine kinase (CK) and aspartate aminotransferase (AST) are elevated, and in severe cases, myoglobinuria (dark colored urine) may occur.

The Px variant is associated with RER in Arabian horses and Thoroughbreds and related breeds. With the identification of the genetic variant associated with this form of equine myopathy by EquiSeq, a genetic test on the horse's mane or tail hairs is now sufficient to determine if a horse has the Px variant which can add to the risk of a horse developing symptoms of RER. 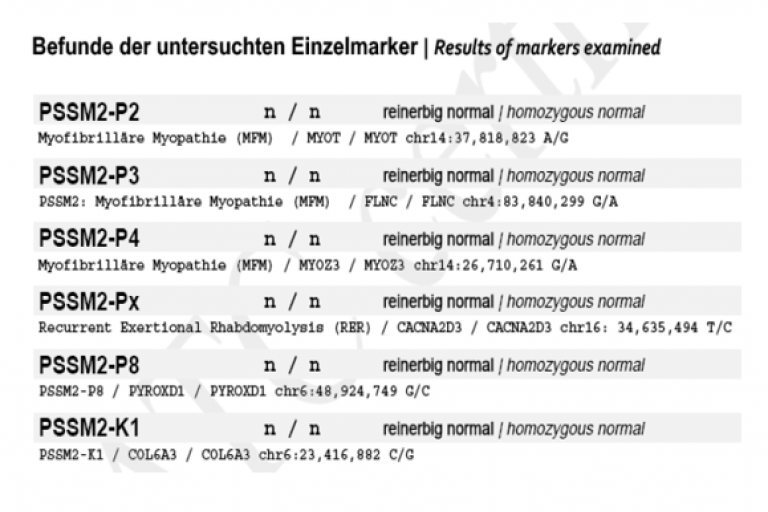 Example of a PSSM2 report where the horse is "normal" (n/n) for all PSSM2 variants.

This type of inheritance is typical in complex hereditary diseases and applies to all known variants of hereditary myopathy/training intolerance.

It means that even a single altered gene copy (heterozygosity) can be sufficient to lead to a horse developing symptoms.

If both copies of the single gene are altered (homozygosity), the risk increases. This affects both the likelihood of the symptoms developing and their intensity.

The "amplification effect" also occurs when different variants come together in any combination.

Incomplete penetrance ('penetration') means that the symptoms do not necessarily occur. Diet, training condition and other (as yet unknown) genetic mutations can moderate the effect of the variants.

n/P = Heterozygous for the variant - high risk of developing symptoms

→ For each variant there is a 50% chance that it will be passed on to the offspring.  The risk of the offspring developing symptoms depends on which and how many variant(s) the other parent also contributes.

P/P = Homozygous for the variant - higher risk of developing symptoms

→ The variant in question (P2, P3, P4, P8, Px, K1) is passed on 100% to the offspring. The risk of the offspring developing symptoms depends on which and how many variant(s) the other parent also contributes.

Caring for a horse with PSSM2

Hereditary muscle diseases are not curable.

Most PSSM2 affected horses benefit from diets with high protein, and/or supplementation of the amino acids Lysine, Threonine, and Methionine, along with regular exercise.

Movement is important, so an active or open stall is helpful.  Due to cold-sensitivity, many horses benefit from blanketing in cool weather.

« Back to the lexicon overview